Nuptialia (from the Latin nuptia, meaning wedding) indicates different kinds of marriage publications. It is a literary genre almost forgotten in our times, even if the roots are indeed noble and ancient. Such compositions can be found in the Old Testament Psalm 45 in the Books of Psalms, a poetic composition dedicated to the wedding of Gerabel, princess of Tirus,

My heart is moved by a noble theme: I speak of the things which I have made touching the king: my tongue is the pen of a ready writer.

Gird thy sword upon thy thigh, O most mighty, with thy glory and thy majesty.

And in thy majesty ride prosperously because of truth and meekness and righteousness: and they right hand shall teach thee terrible things.

So shall the king greatly desire thy beauty.

Another biblical book that could be seen entirely as a Nuptialia is the Song of Songs.

The tradition of writing Nuptialia was very common in the Greek world during classical times. They were also known as epithalamia ἐπιθαλάμιον . A Greek word coming from epi thalamus which literally means: over the bed. Those were the serenades sung near the bedchamber of the newly wedded, but in honor of the bride, before they were free to retire. We have wonderful compositions penned by Sappho, Callimachus and Theocritus. Such literary genre was so popular to spur Dionysus of Halicarnassus to dedicate a whole chapter to it in his Arte Rethorica.

The Romans carried on the tradition though to a lesser extent. Catullus and Statius produced examples of the form. From the centuries of the Roman decadence we have gracious compositions by Catullus, Ausonius, Claudianus, Martians Capella and Sidonius Apollinaris.

In Medieval times this genre was was abandoned but emerged again during the Italian Renaissance. The first Nuptialia to be reproduced on a printing press was a composition by the venetian Pescennius Niger on the occasion of the wedding of Sigismund of Augsburg with Catherine of Saxony in 1484.We have Nuptialia by Torquato Tasso and Giambattista Marino, to name just two of the greatest writers. 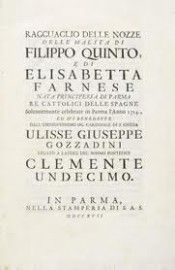 A great number of Nuptialia appeared during the XVIII century, quickly becoming the rage and the fashion, indeed a true obsession among the small nobility and the literary Academies which were present in all cities of the small States of the Italian Peninsula. Compositions possessing a degree of originality were few, but the screeching of the printing presses must have been deafening.

From that period we have a great number of sonnets, rhymes, stanzas etc. describing the imaginary country of Arcadia, full of nymphs, satyrs, beautiful shepherds and shepherdesses.

In 1728 Enrichetta of Este married Antonio Farnese, Duke of Parma, to commemorate their union the poet Carlo Innocenzo Frugoni presented a Nuptialia containing not only his compositions, but also those penned by 232 other poets! As a matter of fact the offering of Nuptialia to famous couples was a sort of teamwork for the members of a literary Academy, not the work one poet alone.

The few booklets printed outside Italy at that time, in Germany, Great Britain and France were normally in Italian, a clear demonstration of the fact that this was mainly an Italian affair.

The greatest part of these works were full of abstruse and even obscure mythological and utopian images that only true literati could comprehend, but from time to time we can find original works which have not much to do with weddings. For instance we find a praise of the coffee in a booklet written by Lorenzo Bartotti (1742 – 1801) or a description of fans by Carlo Belli (1742 – 1816). We may also find new inventions coming from beyond the Alps. For instance in a small Nuptialia by Guarino Belgrano we can read the first description in Italian of the flying machine built by the Montgolfier brothers. It was printed at Ravenna in 1784, less than one year after the first flight performed at Annonay, France. Belgrano introduces his work with this baroque presentation:

For the happy wedding of the nobleman Costantino Montalti from Cesena with the noble lady madam the Marchioness Lucrezia Gavassini from Ferrara, a little poem of the abbot Don Guarino Belgrano of the Knights of Famolasco in Turin, Lateran canonic, Arcadian Shepherd, Informed academic, Concordant, Unmoved etc. etc.

We should like to mention also Ludovico Savioli (1729 – 1804) who tried his hand at Nuptialia with enormous success, though today he is totally forgotten. His Amori published in 1765, was the book that created the Italian rococo style, a real best seller in those days.

This literary fashion passed through the tempest of the French Revolution and the crossing – like a meteor in the sky – of Napoleon, to reappear later, stronger than ever. The greatest Italian printer of that period, Giambattista Bodoni of Parma, produced several Nuptialia, which are now avidly sought after by avid collectors around the world because of their typographic grace. Starting from the second half of the XIX century there was a noteworthy change. The fashion for such wedding publications started to shift from the nobility to the bourgeois, to the industrialists and the landowners, who were clamoring to get their social respectability. We find many Nuptialia for weddings between lawyers and common ladies, for architects and engineers, no longer only for counts, dukes and duchesses and, perhaps for this reason, the aristocracy abandoned such custom, feeling that it had been polluted by the bourgeoisie. With the beginning of the XX century the use of Nuptialia is rarely seen until it disappeared completely during the1930’s.

As Augusto Campana wrote in his Humanist called at the Cesena School in 1486 printed for the wedding Tina Ranchini-Alfredo Beltrami in the year 1928:

Today the tradition of wedding publications has disappeared. They were the grace of a bygone Era on which the sun has already set. When sonnets, songs and rhymes spread over the short distance of a page or on a flowery pamphlet they were occasionally an opportunity – let us not say a pretext – for the publication of serious doctrinal studies, of a rare document, or for the illustration of an historical curiosity. However for the greater part they were just Vanity and for this reason it was too easy to dismiss them.

One of the largest collections of Italian Nuptialia is in Germany, composed of some 3000 pamphlets and ephemera. Fritz Schillman bought it in 1922 from the heirs of a Neapolitan lawyer, a certain Casella, who had been an avid collector throughout his life. Schillmann later bequeathed the whole collection to the Staatsbibliothek of Berlin, where it is still kept.

When such writings possess a non-ephemeral interest or a certain originality and beauty, they are sought after by bibliophiles and because of their rarity, and they can reach surprisingly high prices. Some are priced around 30,000 USD! 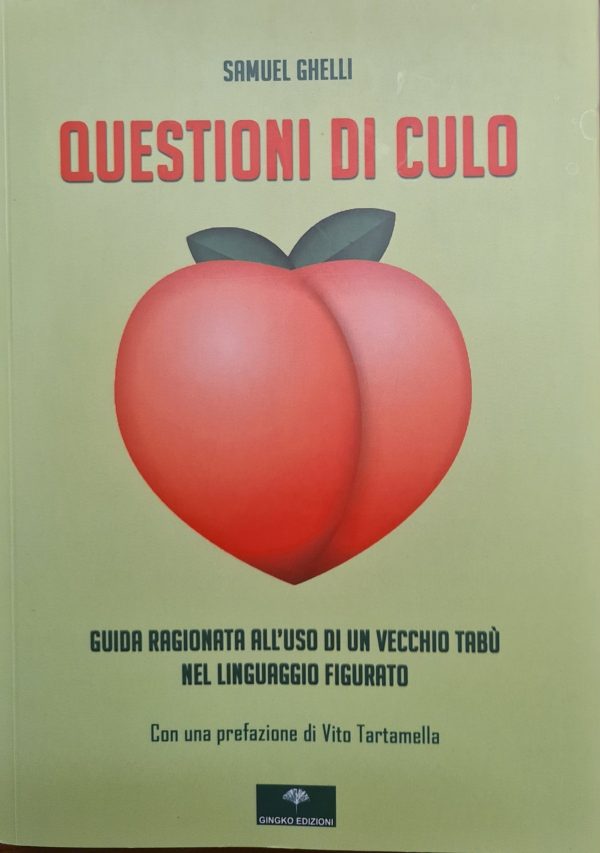 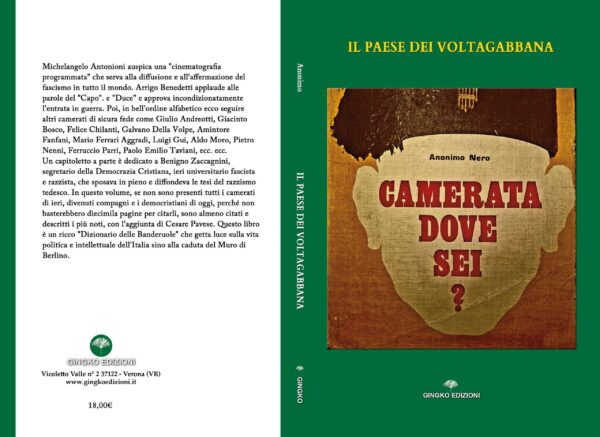