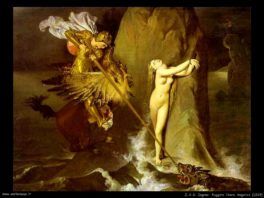 Matteo Maria Boiardo (1434-41 – 19/20 December 1494) was a famous Renaissance poet. He was born at Scandiano, Reggio Emilia, Italy and he was a contemporary of Leonardo Da Vinci. His Orlando Innamorato or Orlando in Love, often quoted in modern Italy but seldom read, was his masterpiece.

He was born noble and, as Count of Scandiano, he was the master of Arceto, Casalgrande, Gesso, and Torricella.
In his youth he earned a degree at the University of Ferrara, mastering Greek and Latin, and even, it seems, some Oriental languages. Boiardo was an ideal example of a gifted and accomplished courtier, possessing at the same time a manly heart and deep humanistic learning.

The heroine in the Orlando Innamorato, a chivalry and fantastic poem, is called Angelica and she is said to be the daughter of the King of China, Galafrone, arrived in France on a mission together with her brother.

The poem was first published in 1483, but the III and last part was missing, in spite of that it soon became a best seller, going through 16 editions but then it remain almost forgotten for three centuries. Perhaps this was due to Ludovico Ariosto, who wrote the sequel which was considered superior to Boiardo’s, that is the Orlando Furioso or Orlando’s Rage.

The final edition, with the missing parts, was posthumously published in 1495 and the oldest copy in our possession is by Piero de Plasiis dated 1487, in two books, kept at the Biblioteca Marciana in Venice.

Angelica, the beautiful Chinese Ambassador from China shows up at the French Court of Charlemagne asking for help against her father’s enemies. Orlando at once fall madly in love with her and then follow her back to Tartary, where he defends her by the tight courtship of the Tartar’s king, Agricante, who wanted to force her into marrying him and then fight even his own cousin Rinaldo.

Why Matteo Boiardo choose a Chinese princess as an example of irresistible beauty? Was it only exoticism or passion for mystery? We cannot give a clear answer but, as I have written in my book dedicated to the possible Chinese origin of Leonardo Da Vinci’s mother, in Renaissance Italy there were some Chinese domestic slaves – the flow did stop only with the taking of Byzantium by the Turks in 1453 – imported through Crimea.

Perhaps one of them, a little Chinese slave, may have greatly impressed the great Italian poet, transforming her into a princess.